The Viktualienmarkt in the heart of Munich

The Viktualienmarkt is one of the most famous sights in Munich. It is located right in the heart of the city and offers a rich variety of fish, vegetables, fruits and meat. In addition, it is used by many locals and tourists to take a lunch break and eat something good. Numerous wine bars and beer gardens in the vicinity invite you to linger. In the following you will learn more about the Viktualienmarkt Munich.

Location and things to know

The Viktualienmarkt is located in the center of Munich’s old town and can be reached quickly from Marienplatz. The Viktualienmarkt Munich was created in 1807 with the relocation of the city market from Rathausplatz to its current location. Currently, the market includes about 100 stalls of traders offering fresh food from the region. In the center is a large beer garden, where they take turns pouring beers from Munich’s six largest breweries. There is also a rich gastronomic offer at the market and in its immediate vicinity. There are many coffee and food stands available. In addition, you can visit one of the restaurants at the Viktualienmarkt. Shopping and sightseeing merge at the Viktualienmarkt. The magnificent Church of the Holy Spirit is in the immediate vicinity, and the square is surrounded by the worth seeing figural fountains with personalities from Munich’s history.

When is the Viktualienmarkt open?

The market is open Monday through Saturday from eight to 8 pm. Florists, bakeries and restaurateurs can also be visited on Sundays. On Mondays some stands are closed.

What goods are offered at the market?

Today, the Viktualienmarkt is known primarily for delicatessen and fine foods. But there are also fruits and vegetables and meat and fish from the region. There is also bread, baked goods, cheese and dairy products. The offer is completed by wine, spirits, souvenirs, plants, flowers and tea and honey stalls. In addition, there are more than 20 snack stands and coffee stalls. In addition, there are many beer gardens and restaurants in the immediate neighborhood. 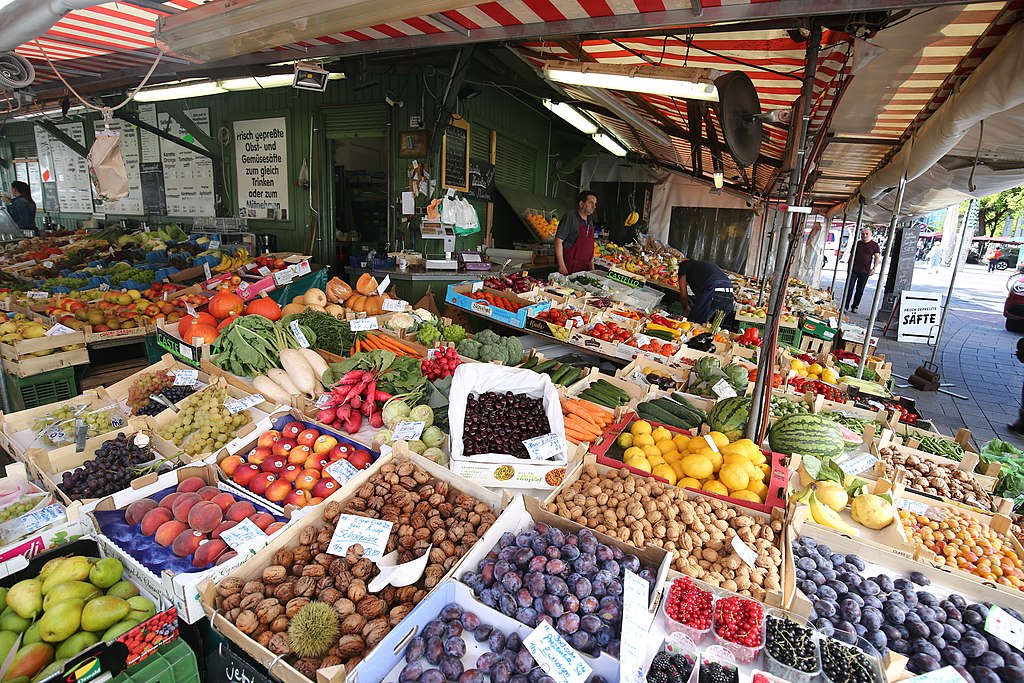 What is there to see around the Viktualienmarkt?

A visual highlight at the Viktualienmarkt Munich are the fountain monuments, which can be seen on the square and on the outskirts. They show six personalities from Munich’s history: Liesl Karlstadt, Karl Valentin, Roider Jackl, Ida Schumacher, Weiß Ferdl and Elise Aulinger. From the viewing platform on the Old Peter you have a perfect overview of the market hustle and bustle. In good weather, you can see up to 100 kilometers into the surrounding area of Munich. You should also visit the Holy Spirit Church, which is one of the oldest churches in Munich. Just a stone’s throw away is the Old Town Hall on Marienplatz. It has a famous carillon that can always be heard on the hour.

Events at and around the Viktualienmarkt

Many events are held in the marketplace throughout the year. On Shrove Tuesday, the traditional dance of the market women can be seen there. On the first Friday in August, the Fountain Festival is held. There are then musical events, and the figure fountains are decorated with colorful flowers. During Advent, the grounds are transformed into an atmospheric Christmas market with lights, crêpes and mulled wine. There are also regular events at the opening of the asparagus season in April and Gardeners’ Day in August.

About the history of the market

The city market was opened in May 1807 at the present location. Previously, it was located on what is now Marienplatz. Since 1870, there have been permanent stalls at the market, which still make up the special charm of the square. The range of goods is always fresh and varies with the seasons. After the Second World War, the badly damaged market was rebuilt. In 2005, the Schrannenhalle, which was demolished in 1932, was also rebuilt.

The departments of the market

The Viktualienmarkt Munich is divided into seven departments, which will be briefly described below.
– Department I: In this area, fruit is offered at umbrella stands by four vendors. These merchants alternate weekly with cheese and wine merchants. Game is also offered at times.

– Division II: In Division II there are numerous fruit and vegetable stands. It is adjacent to the Schrannenhalle and includes the famous Café Nymphenburg and the Karl Valentin Fountain.

– Section III: In the third section, the stands form a courtyard in which there is a small fountain. These stands are staffed by soup kitchens, potato vendors and bakers. Exotic products are also available here.

– Department IV: In department IV are the Liesel Karlstadt fountain and the maypole. The focal point is the large beer garden with around 1,000 seats. The special feature of this beer garden is that the beers of all six major Munich breweries are served there in weekly rotation, as the city did not want to put anyone at a disadvantage when awarding the concession. In the beer garden, the Munich Breweries Association organizes a Brewers’ Day every year. But Department IV also includes the fish hall and the forest market, where you can buy products such as mushrooms, palm branches and wreaths.

– Department V: In Department V there are numerous stalls stocked by butchers. The department has a basement. The cellars are used for storage. There are no cellars under sections I to III because the old Munich city streams flow underground there.

– Division VI: The sixth division was completely renovated in 2006. It is occupied by stands of home producers. Offered are fruits, vegetables, meat, milk, eggs and cheese. The adjacent Kuttler Hall houses fishmongers and poultry dealers.

– Department VII: Here, on a small hill, is the Petersbergl, a brick building designed by Arnold Zenetti in 1880. It houses a café, butcher’s row, a comb store and two craft stores. Petersbergl is spatially separated from the market by a road, but is still an important part. Above the stalls there is a terrace open to the public. From there you have a wonderful view of the market action.

What is there to discover around the Viktualienmarkt Munich?

To the north, the market is bordered by two churches, the Church of the Holy Spirit and Old Peter. The western edge is formed by office and commercial buildings, while the reconstructed Schrannenhalle is located in the south. Opposite Frauenstrasse, one finds mixed residential and commercial development. It runs from the eastern side of the market square to the Church of the Holy Spirit. Otherwise, the marketplace is surrounded by public streets. There are many beer gardens, cafes and restaurants at the Viktualienmarkt, which has become a tourist magnet.
The Doma – Restaurant & Bar also borders the Viktualienmarkt and is located at Prälat-Zistl-Straße 10, directly opposite the Schrannenhalle. In addition to our wine bar with a wine list that lists over 230 wines, we offer modern international cuisine with a bar and creatively interpreted drinks in a design-oriented atmosphere. After your visit to the Viktualienmarkt, stop by and see us.